We get many questions about resisting arrest and other similar crimes 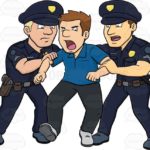 This encompasses many more offenses than just resisting arrest. It is punished as a Class 2 misdemeanor in North Carolina. If any person shall willfully and unlawfully resist, delay or obstruct a public officer in discharging or attempting to discharge a duty of his office, that person is guilty of this offense.

We most commonly see clients charged with this offense when they did not follow police commands or when a police officer accuses them of putting up some sort of resistance during an arrest. It almost always accompanies another charge, such as trespass or assault, for example. This is because this crime is charged when someone is accused of interfering with a police officer carrying out his or her official duties. Typically, although not always, this occurs when the officer is investigating a crime that the defendant has been accused of committing or when the officer is attempting to place the defendant under arrest.

Assault on a Government Official

This crime oftentimes accompanies resisting an officer. Assault on a government official is governed by North Carolina General Statute 14-33. It is punished as a Class A1 misdemeanor, which is the most serious level of misdemeanor in North Carolina.

If the defendant assaults a law enforcement officer and inflicts serious bodily injury on the officer, the crime becomes more serious and is punished as a Class F felony.