In North Carolina, assault is broad category that encompasses many, many different 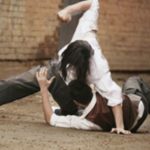 Let’s start exploring some of the various types of misdemeanor assault in North Carolina.

It is a Class 1 misdemeanor if a person commits an assault, assault and battery, or affray under the following circumstances:

It is a Class A1 misdemeanor if a person commits an assault, assault and battery, or affray under the following circumstances:

Assault by pointing a gun

Assault by pointing a gun is a Class A1 misdemeanor. A person can be charged with this crime in North Carolina if they point a gun (loaded or unloaded) at another person. It does not matter if the act was intended as actual threat or just for “fun”.

Assault with a deadly weapon

If you have are facing an assault charge in North Carolina, you should contact a criminal defense attorney immediately to discuss your options. The criminal defense lawyers at Gilles Law can provide you with insight into your charges. Call us today at 980-272-8438.