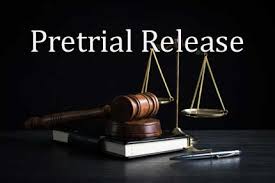 Pre-trial release – One of the hot topics in today’s environment is the fact that across the country, thousands of people that have not been convicted of a crime are sitting in jail. In the past, we have talked about the bail bond process and specifically bond hearings, and how they work.  That, however, was just one of the topics regarding pre-trial release.

In this blog we will attempt to shed some light on pre-trial release, to give a better understanding of the process.  This is for informational purposes only and would be a very poor substitute for the advice of a criminal defense attorney.

What is pre-trial release?

Pre-trial release in general is exactly what it sounds like.  It allows a defendant that has been accused of a crime to await his trial date without being detained in jail.

Pre-trial services is a government agency that helps the North Carolina Courts make decisions with regard to release and detention decisions.  They also provide for monitoring and drug testing of the accused while they await trial.  Pre-trial services has the authority to recommend to the court that someone who was once in their custody be arrested.

A defendant can be released to the custody of pre-trial services instead of having to pay a bond or having to remain jail. This means that person will be allowed to go work and live in their home as usual, but they would have to adhere to at least some of the following conditions:

Not everyone who is charged with a crime will be eligible to be released prior to their charges being dealt with. Capital offenses usually require the defendant to remained detained until his case is resolved.  Also, some drug trafficking charges make it extremely difficult for a defendant to secure his pretrial release.

Rarely is it the case that someone in pre-trial release doesn’t have at least some conditions to adhere to. North Carolina General Statute 15a-534, sets out information regarding eligibility. Examples of common conditions are:

Victim’s rights with regard to Pre-trial release