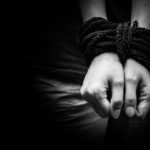 or modern day slavery. Human trafficking, involuntary servitude, and sexual servitude are all related offenses in North Carolina. These crimes are all punished as felonies. This blog explores these crimes and how they differ and relate to one another.

Human Trafficking is governed by N.C.G.S. 14-43.11. A person is guilty of the offense of human trafficking if that person:

The questions that logically follow are, what is “involuntary servitude” and what is “sexual servitude”? We explore these questions below.

Involuntary Servitude is governed by N.C.G.S. 14-43.12. A person is guilty of this offense if that person:

Sexual Servitude is governed by N.C.G.S. 14-43.13. A person is guilty of this offense if that person:

These three crimes are different from one another and North Carolina law requires that these offenses be treated separately. These offenses may not be merged together.