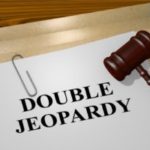 Everyone has heard of double jeopardy. Many people have a basic understanding of this concept, but let’s take a closer look at double jeopardy in North Carolina and clear up any confusion or misconceptions.

Where does the concept of double jeopardy come from?

The Fifth Amendment prohibits the government from prosecuting the same person twice for the same offense. Double jeopardy is considered a defense to a criminal charge. Before using this defense, jeopardy must first “attach”.

When does double jeopardy attach to a charge?

When does double jeopardy apply?

What about mistrials? In and of itself, a mistrial is neither an acquittal or a dismissal. So, does double jeopardy preclude the state from trying a case again after a mistrial has been declared? The answer is, usually not. But let’s take a look at this further.

If a mistrial is declared for a “manifest necessity”, double jeopardy will NOT preclude the case from being heard again. A manifest necessity only exists when some event occurs at trial that creates a situation where the defendant’s right to have the trial continue is outweighed by the public’s interest in fair trials.

If you have been charged with a crime or have a question about using the defense of double jeopardy, you should contact a criminal defense attorney. Gilles Law has criminal defense lawyers practicing criminal defense in North and South Carolina, both at the State and Federal levels.