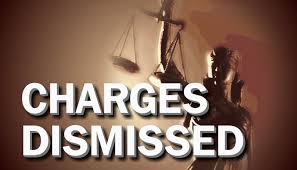 Often, when calling us a for the first time, clients summarize what they have been charged with and what special circumstances they think they have, and they sometimes end the conversation by saying “I want this dismissed”.  Well of course they want it dismissed, who doesn’t?  That’s like saying “I don’t want to go to jail” (which is something else that clients tell us all the time).  We know these things and we will do our best to accomplish these goals but it is not always that simple.  Specifically, with regards to dismissing charges, that is something that a criminal defense attorney can make an argument for, but we don’t the power to get it done unilaterally. That ability is left to the prosecutor and the judge.

In this blog, we will talk about dismissals in criminal cases and how they can be achieved. Like all of our blogs this is intended for educational purposes only, and not intended as a substitute for the advice and counsel of a criminal defense attorney.

Dismissal of criminal charges before trial

As we have stated many times before, there are three ways a criminal case will end: through a dismissal, through a plea bargain, or through a criminal trial. Specifically, with a dismissal, the prosecutor has the authority to dismiss a case if he or she feels that the state does not have enough evidence to eventually obtain a conviction.  A criminal defense attorneys’ role in this process may be to try to make an argument to convince the prosecutor that they don’t have enough evidence to obtain a conviction.

Other times, dismissals can be obtained pre-trial through some deferred prosecution or conditional discharge programs available to the defendant.

Barring one of the two above-mentioned scenarios, your criminal charges are not going to be dismissed simply because you want them to be.

Dismissal of criminal charges once a trial has begun

Insufficiency of the evidence

If you have been charged with a crime and need legal representation, contact us.  At Gilles Law, we handle both state and federal criminal charges in North Carolina and South Carolina.