Bribery is a crime, whose meaning is often misunderstood. In the criminal law context, the term bribery is often misused. Your average 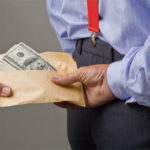 person tends to assume that bribery is generally when someone pays someone to do something that they would not have otherwise done. This assumption is inaccurate because bribery involves a particular set of circumstances that are not often applicable to most people. If you have are facing bribery charges or have been charged with any crime, speak to a criminal defense attorney as soon as you can.

How the state of North Carolina defines bribery

Bribery is defined by North Carolina General Statute § 14-217. This statute lays out the underlying concept in this crime – that there must be government officials involved for this crime to take place. This statute specifically states:

“If any person holding office, or who has filed a notice of candidacy for or been nominated for such office, under the laws of this State who, except in payment of his legal salary, fees or perquisites, shall receive, or consent to receive, directly or indirectly, anything of value or personal advantage, or the promise thereof, for performing or omitting to perform any official act, which lay within the scope of his official authority and was connected with the discharge of his official and legal duties, or with the express or implied understanding that his official action, or omission to act, is to be in any degree influenced thereby, he shall be punished as a Class F felon.”

As you can see, this outlines what it means to take a bribe. The person who is charged with a crime under this statute has taken money or something or value and criminally abused his power as a government official.

Allegations necessary to charge and prove bribery, with regards to receiving a bribe

Elements that must be proven in order for a defendant to be convicted of bribery:

Making a bribe is covered by North Carolina General Statute 14-218, and it makes it illegal for any person to offer a bribe whether the bribe is accepted or not.

Sentencing for bribery in North Carolina

Both offering a bribe and taking in a bribe are Class F felonies, and follow the North Carolina Felony sentencing guidelines.

Bribery charges, like a lot of other criminal charges in North Carolina, can be very complicated to navigate through. If you have been charged with a crime In North Carolina, you should contact a criminal defense lawyer as soon as possible. At Gilles Law, we handle criminal law matters in both North Carolina and South Carolina.